Seastars have an amazing ability to regenerate a limb if one is lost due to predators, trapped by a rock or other reasons. Much is research is being done on this regeneration process. We, as humans, cannot yet regrow a limb! The following explains the 3 basic phases of regeneration limb growth. 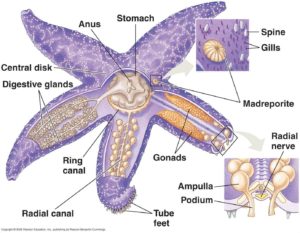 Seastars have a main central disk with limbs radiating out. Each limb contains a copy of vital organs. The underside of the seastar is where the mouth and their tube feet reside. They also have ‘eye spots’ (light sensitive organ) at the end of each of their arms. Due to the multiple copies of the organs inside their arms this enables the seastars to be resilient to limb loss and continue to survive long enough to grow replacements.

Seastars can lose limbs due to predation, or due to self-amputation either to escape or for reproduction. When the limbs of a seastar are removed, a seastar can begin to regrow another to replace the missing one. This process takes months to over a year to complete. 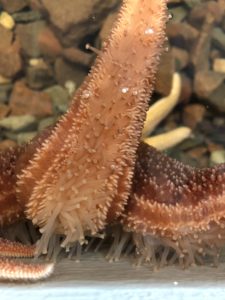 PHASE 1 : REPAIR.
Repair begins with sealing of the coelomic canal to prevent any further fluid loss and to stop foreign pathogens from entering. This is done by the arm wall contracting and coelomocyte cells converge to form a clot and may take care of any foreign debris via phagocytosis. In the following 48 hours, epithelial cells begin stretching inwards from all around the wound to the middle until a continuous layer is formed resulting in new tissue over the wound site. The tissue at the wound also becomes increasingly thicker and more permanent over the next while. The end of the repair phase is marked by a temporary edematous layer where fluid is retained along with important cells, which as it matures over time is the scaffolding for regenerative growth.

PHASE 2 : EARLY REGENERATION.
Once the injury has been healed the early regeneration phase begins. In this phase the coelomic cavities are the main physical driving force. The excess fluid from the coelomic epithelial tissues causes the enlargement of component cells that produces a pressure for support in the regrowing canals and also creates a turgidity that physically supports the regenerate’s shape until skeleton and muscle formation can start. There is an outpouring of dedifferentiating muscle cells towards the regenerating tip and the influx of cells supports the outgrowth of the radial nerve cord from any existing nerve cord remaining post amputation. Early skeletogenesis also begins during the early regenerative phase as plates of calcium carbonite deposit into the collagen network developing in the former fluid retention area. Importantly, near the end of the phase, a small regenerate appears and the pressurized radial water canal starts regenerating the terminal tube foot which is the first defined structure to regenerate. 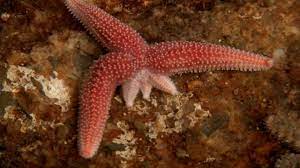 PHASE 3: ADVANCED REGENERATION.
This consists of the regenerate starting to morph into a little arm approximately 3-6 months post amputation which will continue to grow over its lifetime. This regeneration of the new arm starts the development of structures at the father away point and this acts as a signalling point of the rest of the regrowth. Massive formation of muscular tissue occurs as well as a basal lamina forming around the muscle tissue to separate it from the coelomic cavity. Then, starting from the terminal tube foot, other musculoskeletal structures will form from the tip. This will continue until regeneration is complete. Movement becomes functional again as the nerve cord finishes and the rest of the central nervous system becomes complete. Over time the photoreceptors will develop again leading to full restoration of the optic cushion, finishing off the regeneration of the seastar.

This regeneration process, including regrowing a new limb, is an amazing capability of Seastars!