By: Mahé Colas and Joanne Carney 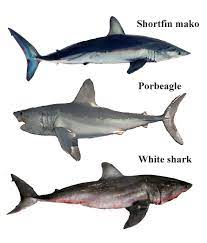 The Bay of Fundy is home to 7 species of sharks, and 3 of them are in the Mackerel Family with hundreds of individuals, including the impressive Great White shark, and its close relatives the Porbeagles and the Mako Shark. Although mackerel sharks are large and heavy, they are very agile and active fishes that are fast swimming. They typically have long conical pointed snouts, spindle shaped bodies, huge gill openings and they generally have a white ventral surface from the head to the tail.

*FUN FACT: you can track recently tagged sharks at the website ‘Ocearch.org’.

PORBEAGLE SHARK (Lamna nasus:) can measure up to 3.5 metres (~11.5 feet) and weigh 230kg (~507 lbs). They are mainly recognizable for their distinctive white rear tip on their first dorsal fin. They also have a crescentic/lunate caudal fin with two keels, which is used for easier movement in the water and strength. Finally, their pointed blade-like teeth with smooth edges and lateral cusplets (small bumps on either side of the tooth) are all identical through the entire jaw.

Porbeagle sharks are coastal species and found in temperate and cold-temperate waters but can be found to 700 metres underwater (2300 ft). Due to their large size porbeagle sharks do not have any known natural predators however their meat is highly valued by target fisheries. They are not only threatened by commercial fishing activities but also bycatch, which is the unintentional capture of species during fishing. In addition to the enormous fishing pressure, the late age of reproductive maturity and few offspring per pregnancy, (around 4 to 5 pups), they have been listed vulnerable to extinction since 2006.

* FUN FACT, all sharks must swim constantly forward to breathe and gain a constant uptake of oxygen.

2) MAKO SHARKS: can be divided into two species the Shortfin Mako (Isurus oxyrinchus) and Longfin Mako (Isurus paucus). The Mako sharks are slightly larger than porbeagles and can reach a maximum size of 4 metres (~13 feet). They have a deep blue to purple skin color and a large caudal fin with only one keel on the caudal peduncle. Mako’s are highly migratory and capable of withstanding significant temperatures changes due to their specialized blood vessel structure called counter current exchanger. It allows them to maintain a body temperature higher than the surrounding water giving them a lot more flexibility to hunt in colder waters. They have a white underside that covers their slender body and an acutely conical pointed snout. This hydrodynamically efficient body shape and their ability to orient their scales (dermal denticles) makes them the fastest shark in the world, also known as the peregrine falcon of the sea because it can reach 43 mph (70 km/h). Their large U-shaped mouth hold large awl-like teeth that present no cusps or serration, and the lower teeth protrude outside of the mouth even when closed.
The shortfin mako which is classified as vulnerable due its popularity for shark fin soup and bycatch in longline fisheries.

*FUN FACT: There are around 470 species of sharks in the world with the oldest one being a 400-year-old Greenland shark recently discovered by scientists.

3) GREAT WHITE SHARK: (Carcharodon carcharias): They are notable for their large size, with larger female individuals growing to 6.1 m (20 ft) in length and 1,905–2,268 kg (4,200–5,000 lb) in weight at maturity. They have a muscular and heavy spindle-shaped body, a moderately long conical snout, long gill slits, large and triangular dorsal fin without a white rear tip and only one keel on the caudal peduncle of the crescentic caudal fin. The name is thought to have come from their stark white undersides. They have a grey dorsal area (sometimes in a brown or blue shade) that gives an overall mottled appearance. 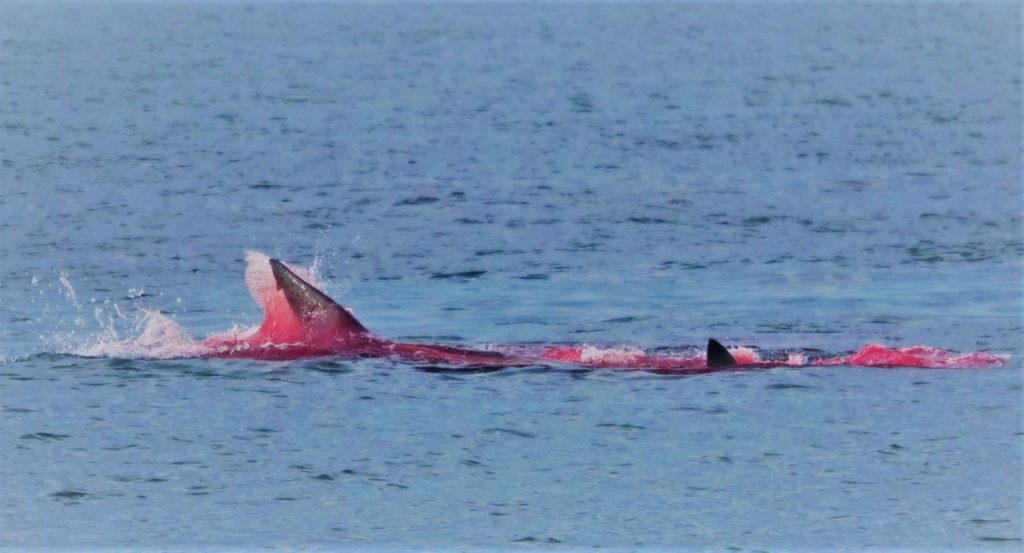 The lifespan of great white sharks is estimated to be as long as 70 years or more. Great white sharks can swim at speeds of 25 km/hr (16 mph) for short bursts and to depths of 1,200 m (3,900 ft). Great white sharks, like many other sharks, have rows of serrated teeth behind the main ones, ready to replace any that break off. When the shark bites, it shakes its head side-to-side, helping the teeth saw off large chunks of flesh. These sharks, like other mackerel sharks, have larger eyes than other shark species in proportion to their body size. The iris of the eye is a deep blue instead of black.

Great white sharks are known to spend increased amounts of time near the seal rookeries along the Atlantic Coast with seals being one of their food sources. It is not recommended to swim near a seal haul-out or rookery! (see photo!). They are arguably the world’s largest predatory fish, preying on mammals as large as baleen whales.

The species faces numerous ecological challenges which has resulted in international protection and is listed as a vulnerable species. They should be afforded protection because of their ecological role in the ecosystem as an apex carnivore in the food web.

The diversity is immense and there is so much more to learn about these predatory fish to protect them as they play an important role in the balance of the ecosystem.